Superpowers are special abilities of Om Nom that facilitate the gameplay and allow the player to pass the level easily in the first three games.

After the player activates the superpowers, the gameplay changes drastically.

The effect of moving the candy can be similar to toggling gravity in Cosmic Box.

By default, new players are given three portions of superpowers to help with some particularly difficult levels. More superpowers can be bought via in-game purchases. Since some update, the original game offers some superpowers to players who launch the game regularly. 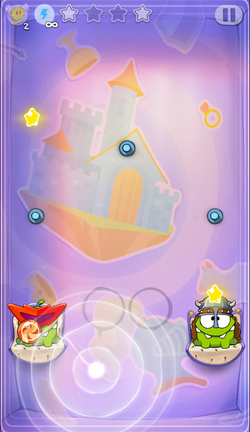 The superpowers appear in the Om Nom Stories as a glove of a superhero, but when it got to the laundry it dropped off the rocket to Om Nom’s house. Om Nom got the gloves and Om Nelle Got a freezing belt ( which she uses as a tiara). The glove does telekinesis.

Retrieved from "https://cuttherope.fandom.com/wiki/Super_noms?oldid=18400"
Community content is available under CC-BY-SA unless otherwise noted.