Cut the Rope Wiki
Register
Don't have an account?
Sign In
Advertisement
in: Cut the Rope: The Comic, Om Nom, Evan 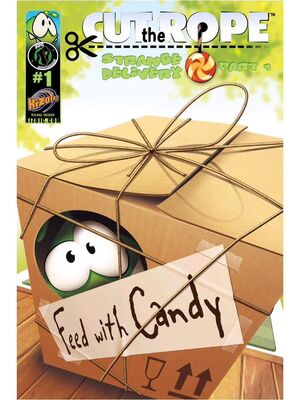 Strange Delivery Part 1 is the first issue of Cut the Rope: The Comic.

Strange Delivery Part 1 is where one of Big Vegetable company's new employee dropped off a box on the front doorstep off of Evan's house. He rings the doorbell and quickly ran away. Evan is sitting on the couch with a bowl of cheese chips with his socks on the table watching television. His living room is messy and scattered with food all over the place. He was sitting comfortably with a pillow on his back and got up to see who was on the doorstep. Evan opened the door to find a box with no return address. Meanwhile, the dog next door is barking with the professor trying to run and get into his truck. All of a sudden, the box begins to shake and then, a green squishy yet adorable creature popped out of the box with Evan hitting the floor on his butt. He turned around to the green creature and was frightened by it. The creature started running everywhere and is out of control. His box is filled with candy wrappers. He stopped for a while before going straight to the kitchen and thus, have Evan fall on his face on the floor. Later on, the kitchen was a huge mess while Evan found a note that says "Feed with Candy." Scared, Evan tried to fix the mess the green yet adorable creature made and wanted to tell them the truth but Evan knows that he will be grounded if he tells them so. He thought about it for a moment and realized that he will lose television for three months if he doesn't clean up the mess the creature made in the house. Evan put on his blue shoes, blue hoodies and a red cap with a question mark on the front and capture the squishy creature. Evan went through the wooden fence and fell backwards. He was chasing after the green, squishy creature who was jumping on the fence. He later found it on the table over by the swimming pool. Evan tried to get closer to it but his pants was caught by the umbrella and fell on the swimming pool. The green creature pulled Evan's hoodie sleeve with its mouth and saved his life. The green creature jumped off and he was found by his neighbor next door who owns the swimming pool. Evan tried to explain who he was until the girl with the short brown hair and green eyes recognized him as her classmate. He pointed out that they have five classes together. The girl's name is Haley and once Evan got out of the swimming pool, Haley gave him a green towel to dry himself off. She found Evan's pants was ripped and she could see his polka dotted shorts underneath. They heard the three evil dogs who have encountered the green squishy creature. The three dogs have the green creature cornered. This part ends with the dogs scaring the green creature.

1/4
Community content is available under CC-BY-SA unless otherwise noted.