Evan's playing with a remote-controlled helicopter and suddenly, he hears the doorbell: "Ding Dong!" He says: "Who's there?" And when he opens the door, a box with a hole and a tape with the word "Feed with candy". That's strange, no ages, no address, no everything, it's just a box! So Evan cut out the box and he sees two eyes look at him and scared. Than that creature in the box shakes the box. So he follow the instructions on the feed with candy tape and give him a lollipop candy. Then, a green creature called Om Nom goes out of his box to eat the candy. But when he finished eating the candy, then he knows Evan's there and scares and decided to go to the box again. But he missed and he must quickly hide in some place else. And he runs and hides under the bed behind a shoebox. So he gives him an another candy and tells him to eat it and don't be afraid. Then he comes out of his shoebox and walk slowly to the candy and eat it. Then, he feel happy and loves Evan! 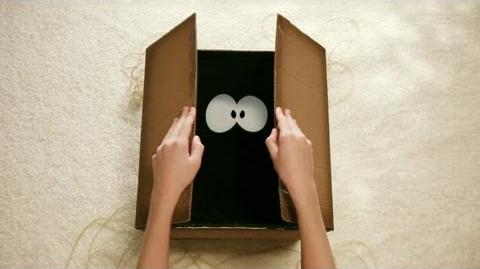