Cut the Rope Wiki
Register
Don't have an account?
Sign In
Advertisement
in: Characters, Cut the Rope 2, Nommies,
and 3 more

Roto first appears in this game in the Forest location. Their first encounter with Om Nom is shown in a Om Nom Stories episode. In terms of gameplay, they allow the player to move around, lift in the air and drop Om Nom, candy and other objects.

"Rotos reside in the forests and are extremely small. They spend most of their lives in the air, even hovering while they sleep. Rotos are also known for their strength - their powerful lower limbs are mainly used to carry food, offspring, and other loads, sometimes much heavier than the Rotos themselves."

Roto are round orange Nommies with a giant bow like propeller on their head. They are as small as 4 in and weighs only 2 lb. However, they are able to carry Om Nom. A scientific nashe Roto species invented by Zeptolab is Helicopteryx-helecopteryx.

Naive, smart, fast and easygoing. Roto resides in the forests and is extremely small: an adult creature hardly grows higher than four inches tall and weighs around two pounds. It is the only naturally occurring species of mammal that uses the helicopter principle to achieve flight. Rotating with their light, propeller-like pseudo-limbs, rotos spend most of their lives above the ground, and even sleep while hovering. Their powerful lower limbs are mainly used to carry different loads, sometimes larger than the rotos themselves. 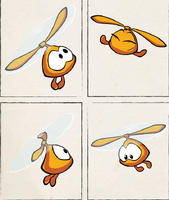 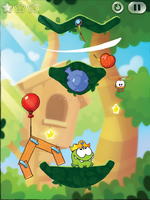 Roto in his natural habitat

First ideas for the Forest location

A range of flying creatures being developed 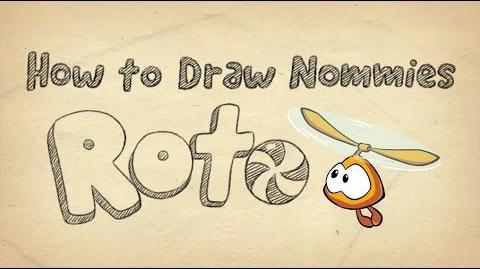 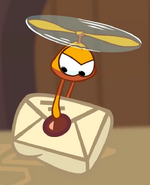 Roto is not feeling happy at all

Community content is available under CC-BY-SA unless otherwise noted.