Cut the Rope Wiki
Register
Don't have an account?
Sign In
Advertisement
in: Characters, Cut the Rope, Experiments,
and 7 more
English

Om Nom is the main protagonist of the Cut the Rope series. The player's aim throughout the games is to feed him with candy by cutting ropes and using various gameplay elements, such as air cushions, magic hats, anti-gravity buttons, and other items. Om Nom is known for his passion for the aforementioned yellow and red candies.

If the candy drops off-screen or gets destroyed, Om Nom will groan in disappointment and make a sad face. Om Nom is a very sweet little creature, unless Spiders steal his candy. If the player touches him, he would either do a handstand, look both ways or wave at you. If the candy gets near him, he will open his mouth wide. He is also considered as a very cute character.

In the original game, there is a ring at the doorbell, and a box shows up at a person's doorstep. Om Nom is in the box, his eyes seen through a hole. On the box there is a sign that says: "Feed with candy." Upon the completion of the original game, Om Nom is shown on a top of a candy mountain. The banner above him says "Thanks for playing"

Om Nom reappears in Holiday Gift, the second game. Just like the first game, you must feed him with candy to complete the levels.

In Experiments, Om Nom's box falls out of a truck; the Professor picks it up and says "Interesting."

In Time Travel, Om Nom is seen in Evan's room eating candy. Suddenly, a time machine appears, showing the year 2013. Om Nom gets sucked into the time machine. As the story unfolds, Om Nom meets up with his ancestors (and for one, descendant).

At the end of the game. Om Nom returns home to find out it was only a dream. (According to the Om Nom Stories, at least.)

In the direct sequel to the original game, Om Nom is first seen atop a mountain of candies. He then spots the Spiders stealing his candy. He chases after them. Om Nom's leg then gets tangled up in a rope attached to the spider's hot air balloon. Later, Om Nom gets unattached to the rope and then meets up with the Nommies.

Om Nom appears as a playable character in the endless runner game, Om Nom: Run. He appears as Super Nom counterpart and his normal self.

And also, Cut The Rope: Time Travel features Om Nom ancestors, which might mean that these creatures have been living on Earth for a long time. However, excluding the present Om Nom, there is no evidence that its ancestors had owners. It is possible they could still be kept by Evan, speculating that Om Nom's species are both domestic and wild, then again, no other creatures of its kind have been seen yet in captivity in his time. He is speculated to be a child or a baby, whichever pulls on your heartstrings more. The age of his ancestors is unknown, but we can speculate they are all the same age.

In an interview, Semyon Voinov said that Om Nom was originally going to have a girlfriend who appeared in Cut the Rope, but it was scrapped. Later, Om Nelle was added to My Om Nom, and she has became a main character in Om Nom Stories.

Om Nom is shown to be a candy lover and has a sweet tooth. 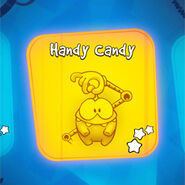 Om Nom with the robotic hand in Handy Candy 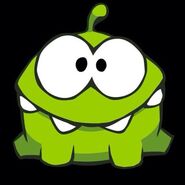 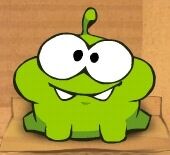 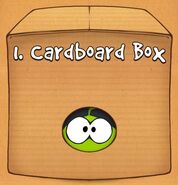 Om Nom in the Cardboard Box 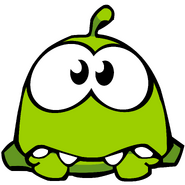 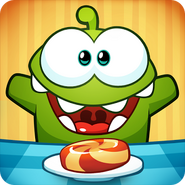 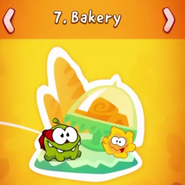 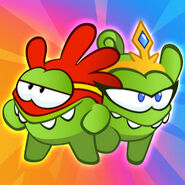 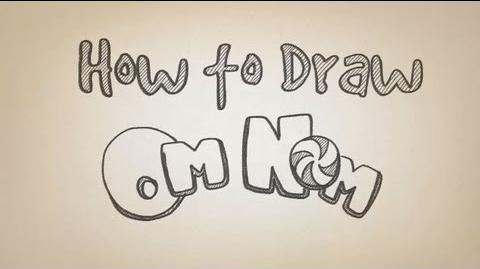 How to Draw Om Nom from Cut the Rope 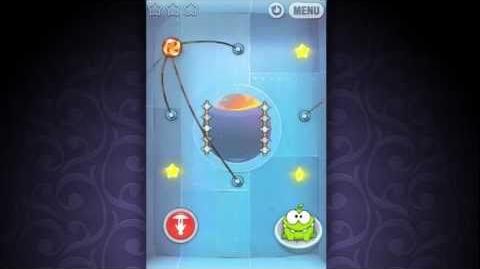