Cut the Rope 2 is a sequel to Cut the Rope released on December 19th, 2013 on iOS, and on March 28th, 2014 on Android. The game was announced in November 2013, when ZeptoLab published a short video of Om Nom being carried away on a balloon. Several images that show the investigation of Om Nom disappearance have been later posted with a hashtag #OmNomIsMissing. Cut the Rope 2 is featuring new gameplay elements, characters that help Om Nom in his journey, adventurous missions of getting from the Forest to the Bakery and collecting candy.

Sitting home with a pile of candies, Om Nom has noticed that a gang of spiders was stealing his candies. Attempting to retrieve them, he got in a trap and was carried away by a hot air balloon. Trying to set himself free, Om Nom got in the middle of the forest. There, he made friends with some new creatures: The Nommies. Roto, Lick, Blue, Toss, Boo, Snailbrow, and Ginger are among them. The game then follows Om Nom on his way several locations:

The progression through the levels is different in iOS and Android versions. In iOS, levels are divided into several locations, much like in previous installments of the series. In Android version, Om Nom follows a pathway across the map: the path goes from Forest to Bakery with some branches appearing along. Chests with bonus items are scattered across the path.

Cut the Rope 2 introduced the concept of energy to the game. From the start, the player has 60 units of energy; each time you start a level, you spend one unit. They are refilled, one unit in five minutes, to the default maximum of 60. This cap value can be upgraded by unlocking hats. A similar concept was introduced to Cut the Rope: Experiments with 1.7.1 update, but was later moved to the free version of the game

Next, the game features several bonus items that make the gameplay significantly easier for players. They are balloons, bombs, teleporters and hints.

Customization items add a new look to the game while also granting some in-game bonus. They are:

Om Nom Stories cartoon series launched a new season named "Unexpected Adventure" along with the release of Cut the Rope 2. These animated shorts give more detail on Om Nom's journey outside the box and his adventures with the Nommies.

On the Apple Store, the game's called "Cut the Rope 2: Om Nom's Quest".

See all the media with the #OmNomIsMissing tag in a separate page. 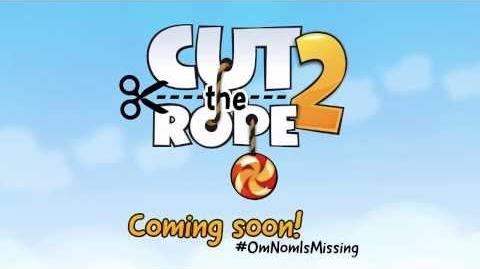 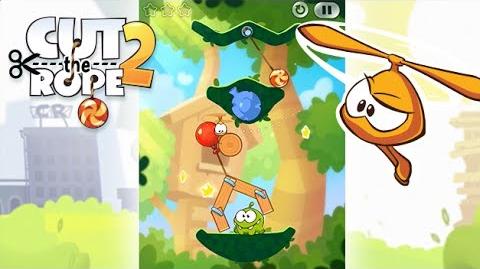 Retrieved from "https://cuttherope.fandom.com/wiki/Cut_the_Rope_2?oldid=18717"
Community content is available under CC-BY-SA unless otherwise noted.