Cut the Rope Wiki
Register
Don't have an account?
Sign In
Advertisement
in: Specials, Cut the Rope, Games
English

Cut the Rope: Holiday Gift is a holiday special in Cut the Rope series. The game first appeared for a limited period of time in December, 2010; it reappeared in 2012, 2013 and 2014 holiday periods. The game consists of 25 levels, with the gameplay almost identical to the original Cut the Rope game. The app also allows users to make photo greeting cards with Om Nom. [NOTE] The game was used only on IOS in 2010 and 2012.

Level 1 shows an example of a simple level layout and teaches the player to cut ropes.

Level 3 introduces the bubble, to be used throughout the game.

Level 5 shows Christmas stockings that act as portals: all the gameplay mechanics of the portals also applies to these stockings.

The box is a gift box, wrapped in checked paper, with a big bowknot at the top. The levels have a Christmas tree drawing at the background with bells and snowflakes. Om Nom is sometimes seen wearing a Santa hat or reindeer antlers. 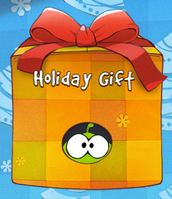