Cut the Rope Wiki
Register
Don't have an account?
Sign In
Advertisement
in: Characters, Cut the Rope 2, Nommies,
and 3 more
English

Boo is one of the main characters of the game Cut the Rope 2. Boo is one of the Nommies that help Om Nom. He is the fifth Nommie that Om Nom meets in the game. He is first seen in Underground location.

Boo first appears in this game in the Underground location. His first encounter with Om Nom is shown in a Om Nom Stories episode. In terms of gameplay, when Om Nom comes in contact with him, he scares Om Nom to make him bounce back.

"He is a night creature."

Boo is a small round dark purple Nommie with sharp teeth. He weighs 5.5 lb and is 7 in high. A scientific name invented by ZeptoLab for this species is Dentibus Horrendus (roughly, horrible teeth).

Funny, cheerful, prankster, mischievous but not angry. Perhaps the least studied of the newly discovered species, boos are distinguished by their solitary way of life. While it is not known where boos came from, all currently known specimens reside in urban ventilation systems. Boos tend to avoid people. Their frightening appearance and large, sharp teeth are not in fact used for hunting — not a single case of a boo attacking another animal has ever been reported. Rather, a boo prefers to frighten its predators with a terrifying defence: they jump at them with a terrible grin, wild-eyed and with bone-chilling sounds. 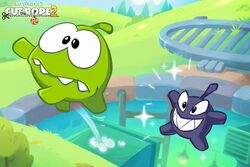 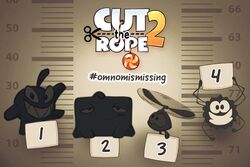 Boo among the suspects 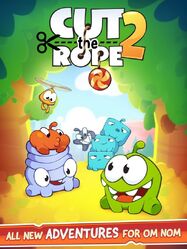 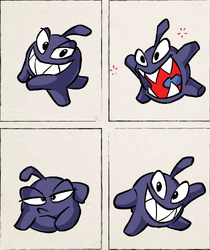 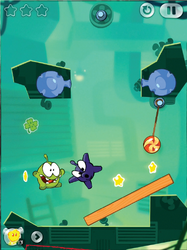 Boo in his natural habitat

Sketches of horrible monsters for Cut the Rope 2

Boo, the dweller of Underground

Boo, as we see him in Om Nom Stories

Русский
Community content is available under CC-BY-SA unless otherwise noted.